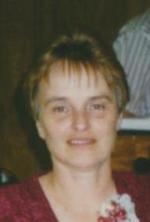 Diane L. Earl, 66, of Aledo, Illinois died Thursday, October 15, 2015 at home. Services are 10:30 a.m. Tuesday, October 20, 2015, at Fippinger Funeral Home in Aledo. Burial is in the Peniel Cemetery. Visitation is 5-8 p.m. Monday at Fippinger's where a memorial fund will be established and online condolences may be made at www.fippingerfuneralhome.com.

Diane was born January 5, 1949 in Morris, Illinois to Clyde and Marilyn Decker Thompson. She received her GED from Blackhawk College. She was united in marriage to Kenneth A. Earl on December 28, 1967 in Aledo, Illinois. He died May 21, 2010.

She was a waitress at various Aledo restaurants for many years, retiring in 2012.

She enjoyed camping, dancing, golfing, visiting area casinos and especially being with her family.

She was preceded in death by her parents, husband, Ken and four brothers.

VFW Auxiliary
The insignias listed here may be subject to copyright and / or trademarked. Those copyrights and trademarks are owned by the respective organizations.

To send flowers to the family in memory of Diane Earl, please visit our flower store.