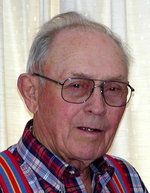 Delbert E. Litchfield, 90, of Rio, IL died Thursday, January 21, 2016 at Rosewood Care Center in Galesburg. Services are 10:30 a.m. Monday, January 25, 2016 at the Rio Presbyterian Church. Burial is in Oaklawn Memorial Gardens where graveside military services will be conducted. Visitation is 3-6 p.m. Sunday at Peterson-Wallin-Knox Funeral Home in Alpha. Masonic services will be at 2 p.m. prior to the visitation. Memorials may be left to Rio Presbyterian Church, the Rio Volunteer Fire Department or Shriner's Hospital for Children. Online condolences can be made at www.petersonwallinknox.com.

He was born January 3, 1926 in Gerlaw, Illinois to Ross and Ruth Coyner Litchfield. He graduated from Galesburg High School in 1945. He married Donna Barrington June 24, 1953 at the Norwood Presbyterian Church in rural Alexis, IL.

Delbert served in the U.S. Army, Occupational Forces in Germany from 1950 to1952.

He was co-owner of Litchfield Brothers Garage and Trucking Service in Rio, where he was employed as a truck driver and mechanic for over 58 years.

He enjoyed traveling and especially being with his family.

Delbert was preceded in death by his parents, infant son, and two brothers, Royal and Donald Litchfield.


American Legion
Army
Army
Army of Occupation Medal
Fire Department Seal
Masonic Lodge
Presbyterian Church
Shriners
The insignias listed here may be subject to copyright and / or trademarked. Those copyrights and trademarks are owned by the respective organizations.

To send flowers to the family in memory of Delbert Litchfield, please visit our flower store.