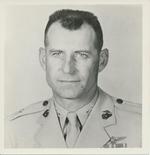 David G. Lawson, 93, of Aledo, IL died Sunday September 13, 2015, at Genesis Medical Center, Aledo. Cremation has been accorded. Services will be 11:00 a.m. Saturday, October 3, 2015 at Trinity Presbyterian Church in Aledo. Private burial will be at a later date. There is no visitation. Memorials may be made to the Mercer County YMCA. Fippinger Funeral Home in Aledo is in charge of arrangements and online condolences can be made at www.fippingefuneralhome.com.
He was born April 12, 1922 in Aledo, the son of Clarence (Chick) and Ann Hebel Lawson. He graduated from Aledo High School in 1940 and attended Blackburn College for one year before entering the Navy Pre-Flight program.
He was a Marine aviator and flew dive-bombers in the South Pacific during World War II. Called back into the service for the Korean War, he flew fighters from an aircraft carrier in the Yellow Sea. He retired after 27 years of service with the rank of Colonel.
Dave graduated from the University of Illinois in 1948 with a degree in agriculture. He farmed the family Centennial Farm for sixty years and served as a commandant at Roosevelt Military Academy in Aledo. He married Joan Essley May 13, 1950. They were married 65 years.
They traveled extensively covering all 50 states, all provinces of Canada and the Yukon Territory where they canoed the Yukon River. They visited many foreign countries often traveling by military air.
He was active in the community and was a charter member of the Aledo Exchange Club. He served on many committees and was chairman for building the Aledo High School track. He was inducted into the Mercer County High School Hall of Fame. Dave attended Trinity Presbyterian Church in Aledo.
He is survived by his wife, Jo, sons Paul (Duffy), Roger (Jan), Dan (Marybeth) and a daughter Lindee (Jeff) Kent. 5 grandchildren, a sister, Mary Fitzpatrick and a Brother Fred Lawson. A daughter, Merridee is deceased.
The family wishes to express their gratitude to the staff at Genesis Medical Center, Aledo, for the kind and compassionate care they provided.

To send flowers to the family in memory of David Lawson, please visit our flower store.