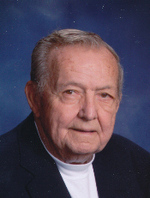 Daryl G. Steinbeck, 82, of Owensboro, KY, formerly of New Boston, IL, died Wednesday, November 19, 2014 at Owensboro Health Regional Hospital. Services are 11:00 a.m. Saturday, May 16, 2015 at Fippinger Funeral Home in Aledo. Burial is in the Mannon Cemetery where graveside military rites will be conducted. Visitation is one hour prior to services where memorials may be left to the Mannon Cemetery. Online condolences can be made at www.fippingerfuneralhome.com.

He was born January 9, 1932 in Brandon, Iowa to Lon and Nina Kemp Steinbeck. He graduated from Joy High School and attended Northern Iowa University. Daryl married Treva Carlson on July 17, 1955.

Daryl was a U.S. Navy veteran serving in the Korean War on the U.S. S. Navasota. He retired after 34 years as an engineer with John Deere. Daryl was a member of AmVets, Veterans of Foreign Wars, American Legion and Trinity United Methodist Church. He was a boy scout leader and enjoyed fishing, golfing, playing shuffle board at the American Veterans Post #119 and spending time with his family.

He was preceded in death by his parents and one brother, Woody Steinbeck.

American Legion
Amvets
Boy Scouts
United Methodist Church
US Navy
Veterans of Foreign Wars
The insignias listed here may be subject to copyright and / or trademarked. Those copyrights and trademarks are owned by the respective organizations.

To send flowers to the family in memory of Daryl Steinbeck, please visit our flower store.