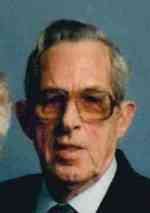 Daryl L. Hilligoss, 87, of New Boston, IL died Thursday, April 18, 2013 at Hope Creek Care Center in East Moline, IL. Cremation has been accorded. Services are 11:00 a.m., Tuesday, April 23, 2013 at Trinity Lutheran Church in Coal Valley. Burial is in the Rock Island National Cemetery where military services will be conducted. Visitation is 4-7 p.m., Monday at Fippinger Funeral Home in Aledo and one hour prior to services Tuesday at the church. A memorial fund will be established and online condolences can be made at www.fippingerfuneralhome.com

He was born October 28, 1925 in New Boston to Leonard and Dolly Holt Hilligoss. He graduated from New Boston High School and married Lois Lucille Brockett August 28, 1946 in Aledo. She died December 1, 2005.

Daryl was a U.S. Air Force Veteran. He was employed briefly at Farmall in Rock Island and then went to work for the New Boston Schools as a Custodian. He retired as a Sanitary Engineer with Millard Maintenance in Moline in 1991.

He was a member of the American Legion Fallerans Post 121.

He enjoyed bingo and polka music.

His parents, wife, grandson, 1 sister and 5 brothers preceded him in death.
A special thank you to Trinity Hospice and the Hope Creek Staff.

Air Force
Air Force
Army of Occupation Medal
European-African- Middle Eastern Service Medal
Good Conduct Medal
Lutheran Church
The insignias listed here may be subject to copyright and / or trademarked. Those copyrights and trademarks are owned by the respective organizations.

To send flowers to the family in memory of Daryl Hilligoss, please visit our flower store.