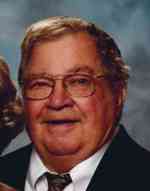 Dale J. Devore, 87, of Aledo, Illinois died Saturday, December 7, 2013 at Aledo Health and Rehab Center. Funeral services are 10:00 A.M., Saturday, December 14, 2013 at Fippinger Funeral Home in Aledo. Burial will be at 2:30 PM in the Pennell Cemetery, Towanda, Illinois where graveside military rites will be conducted. Visitation is 4-7 p.m. Friday at Fippinger's where the Aledo Masonic Lodge # 252 AF & AM will conduct services at 7 p.m. In lieu of flowers, a memorial fund will be established. Online condolences may be made at www.fippingerfuneralhome.com.

Dale was born September 10, 1926 in Normal, Illinois to Louis and Pearl Jones DeVore. He graduated from Towanda High School in 1944. He enlisted in the U.S. Navy and was a veteran of WWII serving in the South Pacific as a Seabee. Dale graduated from Bradley University in Peoria with a degree in Civil Engineering. He married Jane Hasse December 10, 1950 in DePue, Illinois.

Dale was employed at Caldwell Rhoads Engineering Firm in Jacksonville, Illinois. He started his own engineering firm, Devore-Bobb in Jacksonville, where he traveled throughout the State of Illinois as a consultant to small communities, specializing in water and sewer systems. He moved to Aledo in 1975 and was employed by the City of Aledo as Director of Public Works and Utilities, retiring in 1991.

Dale was a member of the College Avenue Presbyterian Church, Church of the Palms in Sun City, Arizona, Mercer County VFW Post 1571, Towanda American Legion, Jacksonville, Illinois Harmony Masonic Lodge #3 AF & AM, the Shriner's, Order of the Eastern Star, the TKE Fraternity and the Oakview Country Club. He enjoyed golfing.

Survivors include: his wife, Jane; one daughter: Suellen (Gary) Slaughter of Fort Hood, TX; one son: Scott DeVore of Ajo, AZ; one grandson: Mason Hultgren of Orlando, FL; one sister-in-law: Ruth Alvis; one niece: Diana and one nephew: Michael, all of Bloomington, IL.

Dale was preceded in death by his parents and one brother.


American Legion
United States Navy Sea Bee's
Presbyterian Church USA
Shriners
US Navy
VFW
The insignias listed here may be subject to copyright and / or trademarked. Those copyrights and trademarks are owned by the respective organizations.

To send flowers to the family in memory of Dale Devore, please visit our flower store.