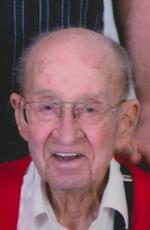 Dale E. Brotherton, 90, of New Boston, IL, died Thursday, November 5, 2015 at home. Services are 4:00 p.m. Sunday, November 15, 2015 at Fippinger Funeral Home in Aledo. Burial is 11:30 a.m. Monday, November 16, 2015 in the National Cemetery, Rock Island Arsenal, where graveside military services will be conducted. Visitation is 2:00 p.m. until the time of services Sunday at Fippinger's where memorials may be left to the Buffalo Prairie Presbyterian Church or the Mercer County Food Pantry. Online condolences can be made at www.fippingerfuneralhome.com.

He was a U.S. Army Veteran of WW2 serving in the Air Corp and the Merchant Marines.

He graduated in 1943 from Kahoka High School in Kahoka, MO. Following the war, he received his B.A. from Iowa Wesleyan College in Mt. Pleasant, Iowa in 1953. He received his Masters of Science Degree in Mathematics from Union College in Schenectady, New York in 1962.

He taught math in Donnellson, Iowa. He began working in the computer industry as a programmer in 1956 and worked for various companies including Deere and Co. in Moline where he retired in May 1986. Later that year he accepted a position at Mt. St. Clare College in Clinton, Iowa as head of the Computer department and Professor of Computer Information System, retiring in 1998.

He was a member of the Buffalo Prairie Presbyterian Church, Airplane Owner's Pilot Association, USO, American Legion and Merchant Marines. He was a former director of the Mercer County Housing Authority and a member of the Yellowbanks Historical Society.

Army Air Corps
Army of Occupation Medal
Presbyterian Church
Victory Medal
The insignias listed here may be subject to copyright and / or trademarked. Those copyrights and trademarks are owned by the respective organizations.

To send flowers to the family in memory of Dale Brotherton, please visit our flower store.