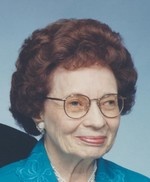 Constance V. Finch, 87, of East Moline, died Sunday, April 17, 2016 at Amber Ridge Memory Care in Moline. Services are 2:00 p.m. Friday, April 22, 2016 at Fippinger Funeral Home in Aledo. Burial is in the Peniel Cemetery. Visitation is 1 p.m. until the time of services at Fippinger's where memorials may be left to Amber Ridge Memory Care. On-line condolences can be made at www.fippingerfuneralhome.com.

She was born October 31, 1928 in Matherville to Paul and Mabel Miller Child. She attended the Matherville schools and graduated from Sherrard High School and attended Moline Institute of Commerce. She married Gerald F. Finch May 28, 1949. He died January 29, 2010.

She was employed as a secretary for the overseas division at John Deere in Moline, retiring in 1986.

Connie was a member of the Community of Christ in Moline. She enjoyed playing the piano and working crossword puzzles.

She is survived by her brother and sister-in-law, Richard and Shirley Child of Matherville and several nieces and nephews.

She was preceded in death by her parents, husband and a brother; Vernon.

To send flowers to the family in memory of Constance Finch, please visit our flower store.