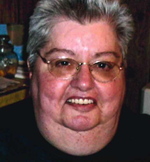 Connie S. "Sarge" Tapscott, age 62, of Rock Island, IL. Died Wednesday April 9, 2014 at Unity Point Hospital in Rock Island. Services are 11:00 AM Monday April 14, 2014 at the Peterson Wallin Knox Funeral Home in Alpha. Burial is in the Alpha cemetery. Visitation is from 2-5 PM Sunday at the funeral home where a memorial fund will be established. Online condolences can be made at www.petersonwallinknox.com

She was born February 15, 1952 in Aledo, IL. To Edward and Carolyn McMeekan Tapscott. Connie graduated from AlWood High School in 1970 and enlisted in the U.S. Army serving as a WAC from 1970 to 1973. She never married.

Connie was currently employed as a clerk with Mediacom of the Quad Cities and previously worked at the Davenport sorting center of the U.S. Post Office, the Rhythm City Casino and the Rock Island Arsenal.

Her parents, preceded her in death


Army
Women's Army Corps
The insignias listed here may be subject to copyright and / or trademarked. Those copyrights and trademarks are owned by the respective organizations.

To send flowers to the family in memory of Connie Tapscott, please visit our flower store.