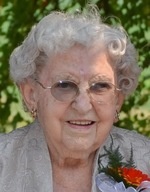 Colleen L. Hughes age 89 of New Windsor, IL, died Saturday March 22 at Genesis Medical Center, Aledo. Graveside services are 11:30 AM Tuesday March 25, 2014 at the Calvary Lutheran Cemetery in New Windsor. Visitation is from 5 - 7 PM Monday (today) at the Peterson Wallin Knox Funeral Home in Alpha. Memorials may be left to the Greene Twsp. Public Library or PBS Television. Online condolences can be made at www.petersonwallinknox.com

Colleen was born January 6, 1925 in Mercer County, IL to William and Florence Brownlee Lynn. She graduated from Viola High School. Colleen was employed at Eagle Signal in Moline, IL until being united in marriage to Kenneth L. Hughes on December 30, 1944 in New Windsor. He died December 4, 2012.

She assisted her husband in the operation of their family farm. Colleen and Kenneth owned and raised world class standardbred racehorses having raised the world record holding trotter champion. She was also proud of the fact that she had raised and bottle fed a colt that was aptly named Orphan Time who went on to become a first class race horse.

Her memberships include the Calvary Lutheran Church in New Windsor, WELCA and Fern Leaf Society. She was an avid bowler at the Alpha Lanes Bowling Alley. She bowled until the age of 87 and held numerous trophies and awards. She enjoyed traveling, reading and spending time with family.

Her parents, husband, 2 sisters Jane Bredberg and Mary Hansen preceded her in death.

To send flowers to the family in memory of Colleen Hughes, please visit our flower store.