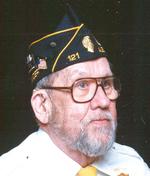 Clifford V. "Sarge" Cook, age 85, of Aledo died Monday, December 17, 2012 at Aledo Health and Rehab. Services are 10:00 a.m., Thursday, December 20, 2012 at Fippinger Funeral Home in Aledo. Burial is in the Aledo Cemetery where Graveside Military Services will be conducted. Visitation is 5-7 p.m. Wednesday at Fippinger's where a memorial fund has been established. On-line condolences can be made at www.fippingerfuneralhome.com.

He was born January 28, 1927 in Viola, IL, a son of Henry and Blanche Williams Cook. He attended Brushwood School in Viola and the Alexis Schools. He married Hilda Horwath May 11, 1961 in Munich, Germany. She died February 27, 1995. He married Marguerite Christian Harmon October 25, 1997 in Aledo.

Clifford was drafted into the US Army in 1945 and re-enlisted in 1947. He was a Veteran of the Korean Conflict and the Vietnam War having attained the rank of Staff Sergeant. He retired from Active Military Service and moved to Aledo in December of 1966.

He was employed as Parts Manager for Sieg Automotive Company in Aledo for 22 years, retiring in January of 1989.

He was a member of St. Catherine's Catholic Church, the Mercer County VFW Post #1571 and the American Legion Fallerans Post #121 in Aledo. He was an avid Cubs and John Wayne fan and an accomplished model ship builder.

He is survived by his wife: Marguerite; one step-daughter: Barb (Wayne) Johanson of Muscatine, IA; one step-son: Bill (Tracy) Harmon of Alpha; 8 step-grandchildren; 10 step great grandchildren; and several cousins.

He was preceded in death by his parents and brother: Bernard.

To send flowers to the family in memory of Clifford Cook, please visit our flower store.