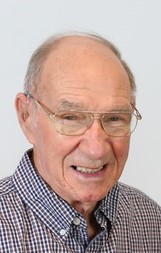 He was born November 9, 1928 in Rio, IL to Herman and Martha Munson Devlin. He graduated from Oneida High School in 1947. He was drafted into the U.S. Army. Cletus served at Fort Huachuca in Arizona as a member of the Corp. of Engineers. On December 2, 1950, he married Joyce Irene Leafgreen at the Little Brown Church in Nashua, Iowa. She died March 21, 2017.

Cletus was employed at Michigan Wisconsin Pipeline and ANR for over 40 years, retiring in 1992.

He was a member of the New Windsor Presbyterian Church and the George Norris American Legion Post 484. He enjoyed “keeping busy” and especially being with his family. He was a lifelong St. Louis Cardinals fan.

To send flowers to the family in memory of Cletus Devlin, please visit our flower store.
Open