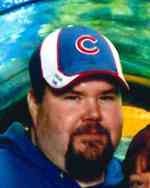 Christopher A. Eggen, 41, of Aledo, Illinois died Tuesday, May 27, 2014 at Genesis Medical Center in Aledo. Services are 10:30 AM Saturday at the Fippinger Funeral Home in Aledo. Burial is in the Peniel Cemetery. Visitation is from 4-7 PM Friday at Fippinger's. Memorials may be made to the American Diabetes Association or to the family. Online condolences can be made at www.fippingerfuneralhome.com.

He was born November 12, 1972 in Muscatine, Iowa to Michael and Judy Ziegenhorn Eggen. Chris graduated from Westmer High School in 1990. He attended UTI in Joliet, Illinois. On September 2, 1993, he was united in marriage to Nicole Headspeth in Aledo.

Chris was employed at Crawford Heating and Cooling in Rock Island for 23 years and was a member of the Sheet Metal Workers Union Local #91 in Rock Island.

He was an avid Cubs and Oakland Raiders fan. He enjoyed fishing, NASCAR and especially his family.

His mother preceded him in death.

To send flowers to the family in memory of Christopher Eggen, please visit our flower store.