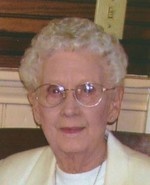 Charlotte R. Doonan, 97 of Preemption, Illinois died Saturday, October 8, 2016 at Amber Ridge Assisted Living in Moline. A Mass of Christian Burial is 10:30 a.m. Wednesday, October 12, 2016 at St. John’s Anglican Church, two miles west of Preemption. Burial is in the Preemption Cemetery. Visitation is 4-6 p.m. Tuesday at Fippinger Funeral Home in Aledo where memorials may be left to St. John’s Anglican Church. Online condolences can be made at www.fippingerfuneralhome.com.

She was born November 25, 1918 in New Boston, Illinois to Charles and Florence Baugess Moseley. She attended school in Mannon and graduated from S. Joseph’s Academy in Rock Island. Charlotte attended St. Anthony’s School of Nursing. She married Leo “Pat” McManus on October 6, 1938. He died August 4, 1940. She later married Marion A. Doonan November 25, 1941 in St. Charles, Missouri. They were married 64 years prior to his death in 2005.

Charlotte and her husband owned Doonan Implement Company where she was secretary/treasurer for 46 years. Most recently, she was chairman of the board of Buffalo Prairie State Bank.

She was a member of St. John’s Anglican Church in Preemption, the Altar Guild and St. Mary’s Guild where Charlotte was a former president and treasurer.

Charlotte enjoyed traveling throughout the United States and wintering in Arizona and Texas. She enjoyed playing bridge and being with her family.

To send flowers to the family in memory of Charlotte Doonan, please visit our flower store.