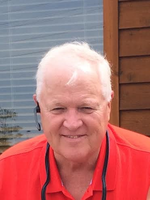 Charles J. Loveless, 68, of Aledo, IL died Friday, August 19, 2016 at Genesis Senior Living in Aledo, IL. Mass of Christian Burial is 11:00 a.m. Wednesday, August 24, 2016 at St. Catherine's Catholic Church in Aledo. Burial is in the Aledo Cemetery. Visitation is 5-8 p.m. Tuesday at Fippinger Funeral Home in Aledo. A rosary will be recited prior to visitation at 4:30 p.m. Memorials may be left to St. Catherine's Catholic Church or the Mercer County YMCA Youth Sports Program. Online condolences may be left at www.fippingerfuneralhome.com.

Charles was born July 19, 1948 in Binghamton, NY to Lyman and Therese Kleitz Loveless. He graduated from St. Thomas Aquinas High School in Florissant, Missouri. He attended Northeast Missouri State College prior to being drafted into the U.S. Army. On June 14, 1969, he married Janet M. Houston in Bettendorf, Iowa. He then graduated from Northeast Missouri State College (Truman State University) in 1971 where he excelled as a college football player. For many years, he played rugby for the Quad City Irish.

He was employed by the Community Unit School District #201 in Aledo as a special education teacher and coached junior high and high school football until leaving the teaching profession in 1977 to pursue a career in the insurance industry. He worked for Franklin Life Insurance and other insurance companies for many years and was currently an agent for Snyder Insurance Company in Bloomington, Illinois. Charles also owned and operated his own cleaning service.

Charles was a member of St. Catherine's Catholic Church and the Oakview Country Club. He was a founding member of the Civic Center Authority in Aledo. He enjoyed golfing and spending time with his family. Charles was an avid Aledo Green Dragons fan, St. Louis Cardinals fan, Iowa Hawkeye fan and staunch supporter of the Republican party.


Army
Army
Roman Catholic Church
The insignias listed here may be subject to copyright and / or trademarked. Those copyrights and trademarks are owned by the respective organizations.

To send flowers to the family in memory of Charles Loveless, please visit our flower store.