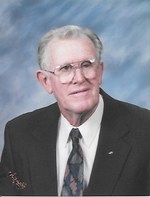 Charles E. Curry, 92, of Alpha, IL, died Monday, September 21, 2015 at WoodRidge Supportive Living Residence in Geneseo. Services are 10:30 a.m. Friday, September 25, 2015 at Grace Lutheran Church in Ophiem. Burial is in the Grace Lutheran Cemetery in Ophiem. Visitation is 3-7 p.m. Thursday at Peterson-Wallin-Knox Funeral Home in Alpha where masonic rites will be conducted at 7 p.m. Memorials may be made to Grace Lutheran Church, Grace Lutheran Cemetery or the Henry County Soil and Water Conservation District and online condolences can be made at www.petersonwallinknox.com.
He was born September 2, 1923 in Milan, IL to Alvin and Katherine Carlson Curry. He graduated from Sherrard High School. Charles married Ruth G. Mattson on January 31, 1945 in Ophiem, IL.
Charles began his farming career in Rock Island County, later moving to Henry County. Charles and his wife, Ruth, eventually settled in Alpha where they built prosperous agricultural enterprises with family. Charles took great pride in being known as a food producer.
He was a member of Grace Lutheran Church where he served in many capacities and the Rio Masonic Lodge #685 where he received the Leadership Award in 2006 and 2009. Other memberships include the Henry County Pork Producers, Henry County Livestock Feeders Association, Kaaba Shrine and the Blackhawk Shrine Club. He was a former president of the AlWood School Board and 4H leader for the Lynox Loyals.
Charles was a member of the Henry County Soil and Water Conservation District where he served as director and received the Outstanding District Director Award and the Meritorious Award. In 1987, he received the Award of Merit and in 1997 was awarded the Conservation Farm Family of the Year. He was the founder of the RC & D Project Smart Bus and was awarded the Outstanding District Director for Prairie Farmer in 1992.
Charles enjoyed dancing, fishing, gardening and especially being with his family.
Survivors include his wife, Ruth; one daughter, Annette (Mitch) Johnson of Springfield, IL; three sons, Duane (Carol) Curry, Neil (Dea) Curry; Bruce (Alex) Curry, all of Alpha; 14 grandchildren; 25 great grandchildren; one aunt, Patricia Nimrick of Taylor Ridge, IL, one brother-in-law, Dale Hamerlinck of Milan; one sister-in-law Helen Burgston of Geneseo, IL, many nieces and nephews.
He was preceded in death by his parents, one daughter, Janet Bloomberg, one infant son, Ronald, two sisters, Betty and Bernice, one brother, Alvin Jr.


4H
Evangelical Lutheran Church in America
Masonic Lodge
Shriners
The insignias listed here may be subject to copyright and / or trademarked. Those copyrights and trademarks are owned by the respective organizations.

To send flowers to the family in memory of Charles Curry, please visit our flower store.