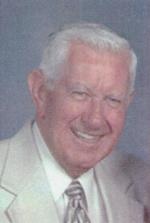 Charles F. Conway, 84, of Sun City, Arizona, formerly of Freeport and Reynolds, IL, joined His Lord on Thursday, October 1, 2015 at home surrounded by his loving family. Mass of Christian Burial is 10 a.m. Saturday, October 17, 2015 at St. Catherine's Catholic Church in Aledo. Burial is in the St. Joseph Cemetery, rural Reynolds. Visitation is 4-7 p.m. Friday at Fippinger Funeral Home in Aledo where a rosary will be recited at 7 p.m. In lieu of flowers, memorials may be left to Smile Train, Banner Hospice or the Alzheimer's Association. Online condolences can be made at www.fippingerfuneralhome.com.

He was born May 4, 1931 in Preemption, IL to Charles and Anna Grady Conway, joining siblings, Tom, Jim, Mary and Kay. Charles graduated from Reynolds High School in 1949 and St. Ambrose College in 1953 with a B.A. in commerce. He served two years in the United States Army and was a member of the 30th Infantry Special Troops. He married Corrine Ketelaar February 2, 1957 in Davenport, Iowa.

Charles was employed by John Deere in Ankeny, Iowa and served for four years as a city councilman. He was later employed as production manager at Stewart-Warner Corp. in Spring Valley, Illinois where he and his production team were recognized nationally for their computer control inventory system. He continued to pursue his corporate career, as CFO with Structo-Freeport, Illinois and APV-Rockford, Illinois. He retired in 1993 and moved to Arizona in 2011.

He was a member of the Elks and Kiwanis Club, United Way and enjoyed singing in the St. Thomas Church Choir. Charles enjoyed boating, family vacations and BBQs, euchre games, his legendary margarita parties and serving the Lord Jesus Christ.

Charles was preceded in death by his parents, one infant son, Charles and one sister, Mary MacDonald.


Army
Army
National Defense Service Medal
Roman Catholic Church
The insignias listed here may be subject to copyright and / or trademarked. Those copyrights and trademarks are owned by the respective organizations.

To send flowers to the family in memory of Charles Conway, please visit our flower store.