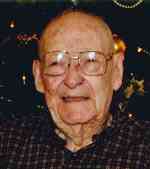 Carl A. Grundstrom, 96, of Aledo died Friday, May 3, 2013 at Genesis Senior Living in Aledo. Mass of Christian Burial is 10:00 a.m., Tuesday, May 7, 2013 at St. Catherine's Catholic Church in Aledo. Burial is in Calvary Cemetery, Rock Island. Visitation is 4-7 p.m., Monday at Fippinger Funeral Home in Aledo where a Rosary will be recited at 7 p.m. Memorials may be left to St. Catherine's or the American Heart Association. Online condolences can be made at www.fippingerfuneralhome.com.

Carl was born March 6, 1917 in rural Taylor Ridge, IL to Oscar and Clementine Vroman Grundstrom. He attended the Andalusia School and the Prairie Union School in rural Reynolds. He married Dorothy Mewes November 25, 1939 in Aledo. She died May 18, 1973. He married Martha Brown Fifield June 1, 1974 in Edgington, IL. She died September 12, 2008.

He was employed at John Deere Malleable Works in East Moline and retired as a supervisor from John Deere Foundry, Silvis in 1976.

He was a member of St. Catherine's Church and enjoyed hunting, fishing, antique guns, and camping and restoring old furniture.

He is survived by: a daughter; Carla ( Roger) Murphy of Aledo, a son; Roger (Elizabeth) Grundstrom of New Boston, 5 grandchildren, 8 great grandchildren, one lovingly expected, 1 sister: Dorothy Thielen of Ottumwa, IA. and several nieces and nephews.

His parents, 1 brother and 2 sisters preceded him in death.


John Deere
Roman Catholic Church
The insignias listed here may be subject to copyright and / or trademarked. Those copyrights and trademarks are owned by the respective organizations.

To send flowers to the family in memory of Carl Grundstrom, please visit our flower store.