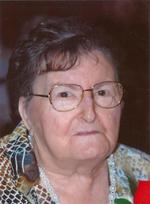 C. June Goodman, 86, of Aledo died Saturday, February 2, 2013 at Genesis Senior Living Center in Aledo. Services are 11 a.m., Wednesday, February 6, 2013 at Fippinger Funeral Home in Aledo. Burial is in the Aledo Cemetery. Visitation is 5-7 p.m., Tuesday at Fippinger's where a memorial fund has been established. On-line condolences can be made at www.fippingerfuneralhome.com.

She was employed in several different capacities at the former Fortner Shelter and Care in Aledo. She retired as Administrator in 1982.

She is survived by 2 daughters: Doris Goodman; Kathy (Charles Lemon) Goodman all of Aledo, 2 grandchildren; Paul Cooper of Ohio and Kevin Cooper of Milan, 4 great grandchildren; Kathy Jean and Caroline Cooper of Davenport, Bailey Dooley and Alexis Cooper both of Milan.

She was preceded in death by her parents, husband, 2 sisters and 6 brothers.

To send flowers to the family in memory of C. Goodman, please visit our flower store.