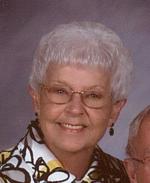 Bonnie J. Brown, age 70, of Aledo, IL, died Saturday, December 8, 2012 at her home. Services are 10:00 a.m., Tuesday, December 11, 2012 at Messiah Lutheran Church in Aledo. Burial is in the Aledo Cemetery. Visitation is 5-8 p.m., Monday at Fippinger Funeral Home in Aledo where memorials may be left to Messiah Lutheran Church or American Cancer Society. Online condolences can be made at www.fippingerfuneralhome.com.

She was born September 6, 1942 in Aledo, IL to Lyle and Frances Clauson Allen. She graduated from Aledo High School and married Dean Green in April 1961. She then married Richard Harwood in February 1974. He died in May 1993. She later married Walt Brown August 31, 1996 in Aledo.

Bonnie was employed as an administrative assistant at the Royal Neighbors of America in Rock Island for 31 years, retiring in November 2000.

She was a member of Messiah Lutheran Church, the Mercer County VFW Post 571 Auxiliary, Oakview Country Club. She enjoyed golfing, watching sports and was an avid Atlanta Braves fan.

She was preceded in death by her parents; husband; and one nephew: Michael.


Evangelical Lutheran Church in America
Royal Neighbors of America
The insignias listed here may be subject to copyright and / or trademarked. Those copyrights and trademarks are owned by the respective organizations.

To send flowers to the family in memory of Bonnie Brown, please visit our flower store.