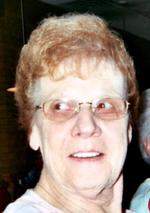 Beverly A. Boehme Bargfield, 78, of Galesburg, formerly of New Windsor, IL, died Monday, January 7, 2013 at Cottage Hospital in Galesburg. Services are 11:30 AM, Friday, January 11, 2013 at Peterson-Wallin-Knox Funeral Home in Alpha. Burial is in New Windsor Cemetery. Visitation is 10 AM until the time of service at the funeral home. A memorial fund will be established and online condolences can be made at www.petersonwallinknox.com.

She was born June 13, 1934 in New Windsor, IL to Vilas and Mildred Tribler. She attended New Windsor Schools and married John Boehme April 30, 1950 in Rock Island, IL. He died in 1992. She married Edward Bargfield September 7, 1996 in Bettendorf, Iowa.

Beverly was employed as a supervisor at RIMCO in Rock Island and Carver Lumber in Milan for several years.

To send flowers to the family in memory of Beverly Bargfield, please visit our flower store.