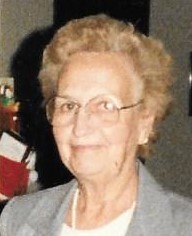 Beulah A. (Firch/Bork) Weir, 94, died Monday, Dec. 4, 2017, at Lutheran General Hospital, Des Plaines, IL.  Services are 11:00 a.m. Saturday, December 9, 2017 at the Alpha United Methodist Church.  Burial will be in Grace Lutheran Cemetery in Ophiem, Illinois where graveside military services will be conducted.  Visitation at 10 a.m. until the time of services Saturday at the church where memorials may be left to Oxford American Legion Post #1197 or the Alzheimer’s Foundation.  Peterson-Wallin-Knox Funeral Home in Alpha are in charge of arrangements and online condolences may be left at www.petersonwallinknox.com.

She was a World War II Navy veteran.

Beulah married Theodore Bork in 1946 and in 1954 they purchased the old Mason Diner, and renamed it Bork’s Diner, which they operated for over 25 years. She was well known for the great pies she made daily. Theodore died May 2, 1970.  Beulah later married Byron C. Weir of Alpha.   He died October 19, 1995.

Along with her husbands, Beulah was preceded in death by her baby daughter.

Click to download / open
To send flowers to the family in memory of Beulah Weir, please visit our flower store.