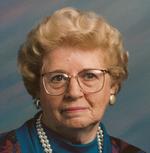 She was born May 17, 1922 in Keithsburg, IL to Paul and Grace Garrett Boden. She graduated from New Boston High School. She married Richard Delos "Sonny" Sedam June 22, 1940 in Muscatine, Iowa. He died in 1987.

Betty was a member of the New Boston United Methodist Church and the Mercer County VFW Post 1571 Auxiliary. She enjoyed playing cards, bird watching, attending her grandchildren's activities and especially loved being with her family.

She was preceded in death by her parents; husband; one daughter and son-in-law: Cheryl and Gary LeHew; and one brother: Paul Jr.

To send flowers to the family in memory of Betty Sedam, please visit our flower store.