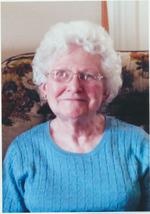 Betty S. Salmon, 85, of Aledo, Illinois died Saturday, July 4, 2015 at Genesis Senior Living in Aledo. Memorial Services are 7:00 PM, Friday, July 10, 2015 at Fippinger Funeral Home in Aledo. Private burial is in the Aledo Cemetery. Visitation is 4-7 p.m. prior to services at Fippinger's where memorials may be left to the Mercer Carnegie Library. On-line condolences may be made at www.fippingerfuneralhome.com.

She was born March 17, 1930 in Eliza Township, Illinois to Thomas H. and V. Genieve "Jane" Beverlin Hagloch. She graduated from Joy High School in 1948 and attended business school in Omaha, Nebraska. On November 6, 1949, she married Jasper Salmon in Joy, Illinois. He died February 3, 2001.

Betty was employed at Mutual of Omaha and J.I. Case Co. in Rock Island. She was a homemaker for many years and then was a nurse's aide at Mercer County Nursing Home, retiring in 1980.

She was a member of the Royal Neighbors of America and a 50 year member of the American Legion Fallerans Post 121 Auxiliary. Betty enjoyed reading, handiwork, knitting, needlepoint. She loved her family, family history and family gatherings, priding herself on family dinners and traditions.

Betty was preceded in death by her parents; husband, Jasper; one grandson: Richard James and one sister, Bonnie Jean.

American Legion Auxiliary
Royal Neighbors of America
The insignias listed here may be subject to copyright and / or trademarked. Those copyrights and trademarks are owned by the respective organizations.

To send flowers to the family in memory of Betty Salmon, please visit our flower store.