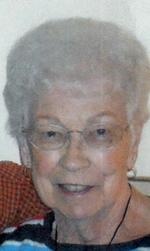 Bernadine M. Brown, 92, of Woodhull, IL died Monday, May 14, 2012 at St. Mary's Medical Center in Galesburg, IL. Services are 11 a.m., Thursday, May 17, 2012 at the United Church of Woodhull. Burial is in the Woodhull Cemetery. Visitation is 6-8 pm., Wednesday at Peterson-Wallin-Knox Funeral Home in Woodhull. Memorials may be left to the United Church of Woodhull or the Woodhull Cemetery Association. Online condolences can be made at www.petersonwallinknox.com.

Bernadine was a homemaker, assisted in the operation of the family farm and worked with her husband selling Pioneer Seed corn.

She was a former member of the Clover Chapel Church and recently joined the United Church of Woodhull. She was also a member of Ladies Aid and Royal Neighbors of America.

Her parents; husband: Kenneth; one sister: Florence; and one brother: Ronald preceded her in death.


Christian Cross
Christian Symbol
The insignias listed here may be subject to copyright and / or trademarked. Those copyrights and trademarks are owned by the respective organizations.

To send flowers to the family in memory of Bernadine Brown, please visit our flower store.