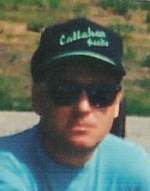 Benjamin F. "Benjie" Childs, 56, of Aledo, Illinois died Thursday, September 25, 2014 at Genesis Medical Center in Aledo. Services are 2 p.m., Monday, September 29, 2014 at Fippinger Funeral Home in Aledo. Burial is in the Aledo Cemetery. Visitation is 2-6 p.m. Sunday at Fippinger's. A memorial fund will be established. Online condolences may be left at fippingerfuneralhome.com and personal condolences can be sent to P.O. Box 35, Aledo, IL 61231.

Benjie was born March 28, 1958 in Aledo, Illinois to Lorelle "Dub" and Lois "Lucille" Retherford Childs. He graduated from Aledo High School in 1976 and graduated as an electrical engineer from Hamilton Technical College in Davenport. Having been through good times and bad, he married his best friend of 21 years, Susan L. Reul December 23, 2003 in Aledo.

He owned and operated Ben Childs Construction in Aledo for many years and enjoyed fishing with his buddies.

He was preceded in death by his father.

To send flowers to the family in memory of Benjamin Childs, please visit our flower store.