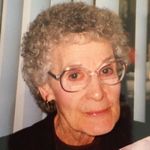 Dorothalene "Dottie" Berry, 98, of Aledo, IL died Thursday, January 1, 2015 at Genesis Senior Living Center in Aledo. Private graveside services will be Thursday, January 8, 2015 at the Aledo Cemetery. There is no visitation. Fippinger Funeral Home in Aledo is in charge of arrangements and online condolences may be made at www.fippingerfuneralhome.com.

She was born November 24, 1916 in Keithsburg, IL a daughter of Harvey and Beatrice Knox Crow. She attended the New Boston schools. On September 30, 1933, she was united in marriage to Lester H. Berry in Keithsburg, IL. He died January 11, 1992.

Dottie worked as a nurses aid at Mercer County Hospital for over 20 years in several departments including OB, inhalation, and the office. She was a member of the Aledo United Methodist Church.

She was preceded in death by her parents, her husband Lester, 2 grandsons, son-law, Gary, 1 sister and 1 brother.

United Methodist Church
The insignias listed here may be subject to copyright and / or trademarked. Those copyrights and trademarks are owned by the respective organizations.

To send flowers to the family in memory of Beatrice Berry, please visit our flower store.