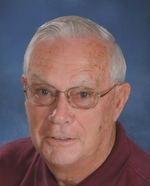 Arnold F. Fetters, 85, of Woodhull, IL, died Friday, January 30, 2015 at home. Services are 11:00 a.m. Tuesday, February 3, 2015 at Bethany Lutheran Church in Woodhull. Burial is in the Woodhull Cemetery. Visitation is 4-7 p.m. Monday at Peterson-Wallin-Knox Funeral Home in Woodhull where memorials may be left to Clover Township Fire Department or Tri-County Ambulance. Online condolences can be made at www.petersonwallinknox.com.

At the age of 17, he became the sexton of the Aledo Cemetery. He later worked at the Shale City Brickyard for 13 years and delivered feed for Moorman Manufacturing in Alpha until his retirement in 1991.

Arnold was a member of Bethany Lutheran Church.

Arnold never met a stranger, could strike up a conversation with anyone and loved to make people laugh by sharing a favorite joke. He always had a pocket full of quarters to hand out to any little ones who came his way. After retirement, he and Maxine enjoyed camping at local campgrounds and spending winter months in Florida.
Survivors include two daughters: Sandy (Rod) White of Galva, IL; Donna (Stephen) Purl of Princeton, IL; one son: Brad Fetters of Davenport, IA; grandchildren, Mark (Stephanie) White of Hampton, IL; Scott (Kari) White of Mahomet, IL; Stephenie (Matt) Hamen of Sun Prairie, WI; Shawn Purl of Washington State; Danielle (Joel) Eaton of Chatham, IL; Samantha and Sydney Fetters of Davenport; great grandchildren, Kolby, Kanon and Kuper White of Hampton; Owen and Jacob Hamen of Sun Prairie, Jackson White of Mahomet; Zayde and Dekota Fetters of Davenport, Iowa; Annabelle Eaton of Chatham, IL; one sister, Sarah Mumey of Bettendorf, IA; several nieces and nephews.

He was preceded in death by his parents, wife, one great grandson, Zayne, three sisters and four brothers.


Lutheran Church
The insignias listed here may be subject to copyright and / or trademarked. Those copyrights and trademarks are owned by the respective organizations.

To send flowers to the family in memory of Arnold Fetters, please visit our flower store.