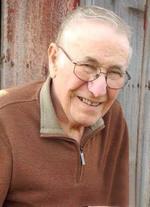 Tony owned and operated Tony's Plumbing and Heating in Alpha since 1957.

He was a member and former trustee of St. John's Catholic Church in Woodhull and the Hook and Bullet Conservation Club.

Tony enjoyed working, fishing and being with his family and friends.

He was preceded in death by his parents, wife, one brother, Sam and half-brothers, Phillip, John and Andy Sikardi.

To send flowers to the family in memory of Anthony Petrovich, please visit our flower store.