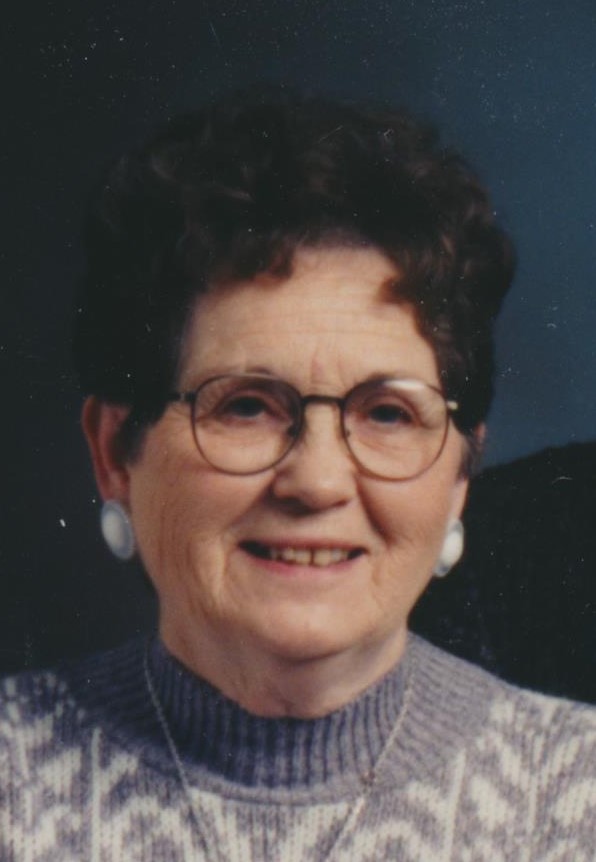 Annabelle King was born December 12, 1927 to George and Anna Inman King. She was proud to be a lifelong resident of New Boston, IL where she had "the best neighbors in the world." The last four years of her life, she was an active resident of Autumn Leaves, Memory Care Center of Oswego, IL and enjoyed bird watching, dancing, exercise, art, bingo, bunco, big mugs of coffee and much love and hugs by the tremendously compassionate staff at Autumn Leaves. She suffered a stroke in 2007 from which she courageously recovered and lived a full life until complications from her vascular dementia returned her home to Jesus' loving arms.

Annabelle graduated from New Boston High School in 1945 and was awarded the DAR good citizenship award which was voted upon by her peers and teachers. This award was an example of how she lived her life, helping others, visiting nursing homes, and quietly and lovingly caring for her family, never desiring any recognition, all the while leaning on her Lord and Savior, Jesus Christ. As her memory lapsed, she never forgot one word of The Lord's Prayer.

On March 20, 1948, she married Howard A. Talbott in Monmouth, IL. They were married over 50 years and he was the love of her life. They ran Talbott Distributing together and raised two daughters, Angie (Talbott-Glover) of Romeoville, IL and Kamala Starrett. Howard and Annabelle wintered in Ocala and Belleview, FL where they enjoyed meeting many long time friends and travelled throughout the U.S. and Canada visiting these friends.
Annabelle worked at the Boss Glove Factory in Aledo, IL and as an auditor for Royal Neighbors of Americak Life Insurance in Rock Island, IL. She worked as store manager for the New Boston Variety Store run by her friend, Dorothy Bare. She also worked for New Boston Food Center run by both Floyd Curtis and LeRoy Koch. She enjoyed Tri State Tour trips to Nashville on an annual basis with her loving sisters and friends. She seldom passed up a dance and in her younger days, she seldom missed the Saturday evening events at the town dance hall. The Pizza Ranch in Muscatine, Iowa and The Garden Restaurant in Aledo, IL were popular eateries with Annabelle and many cups of coffee shared.

Annabelle was a lifelong member of the United Methodist Church of New Boston and served for many years in the Communion Ministry and working the ice cream socials and fundraisers, teaching her children the importance of service. She served as room mother for many years for her children and attended every event possible for her granddaughters. Annabelle was the family prayer warrior and received many calls for prayer requests from her children and grandchildren.

She was preceded in death by her parents, husband, daughter, Kamala Michael-Starrett; 4 sisters, one sister-in-law, 4 brothers, 2 brothers-in-law and Howard's parents.

The family would like to thank the compassionate team of Autumn Leaves Memory Care of Oswego and Angels Grace Hospice of Bolingbrook, IL.

Click to download / open
To send flowers to the family in memory of Annabelle Talbott, please visit our flower store.