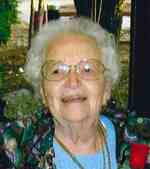 Pauline Allen, 99, of New Windsor, IL, died Sunday, February 16, 2014 at Genesis Senior Living Center in Aledo. Services are 11 a.m. Friday, February 21, 2014 at Peterson-Wallin-Knox Funeral Home in Alpha. Burial is in the New Windsor Cemetery. Visitation is 5-7 p.m. Thursday at the funeral home where memorials may be left to the Genesis Senior Living Center or New Windsor Presbyterian Church. Online condolences can be made at www.petersonwallinknox.com.

She was born December 2, 1914 in Martelle, IA to William and Edythe Goudy Stewart. She graduated from Martelle High School in 1932 and married Fred William Allen August 23, 1941 in Martelle. He died January 8, 1997.

Pauline was a member of the New Windsor Presbyterian Church and its Golden Circle and Women's Guild.

She was preceded in death by her parents; husband; son: Max Allen and three sisters.


Presbyterian Church
The insignias listed here may be subject to copyright and / or trademarked. Those copyrights and trademarks are owned by the respective organizations.

To send flowers to the family in memory of Alice Allen, please visit our flower store.